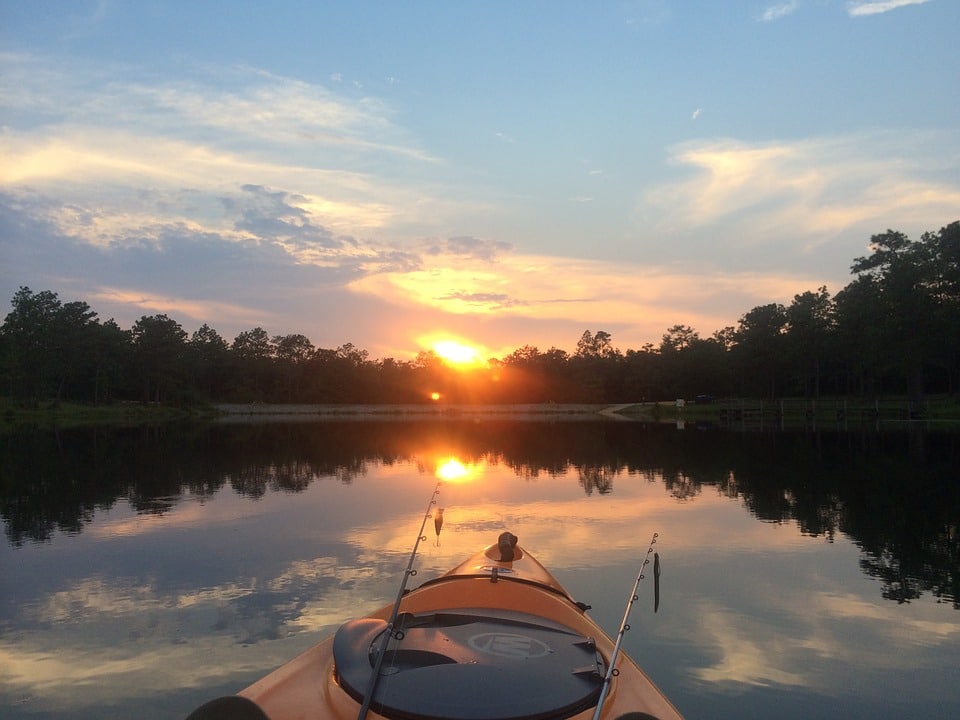 These days, kayak fishing is pretty popular, and for a good reason. Using a kayak as a fishing vessel is a much more affordable option than traditional gas powered boats. A kayak also allows the angler to access some of the most under-fished, remote hot spots. Fishing kayaks can also be rigged with just about any feature the die-hard bass angler can imagine.

With these tips you can learn the mechanics of fishing out of a kayak, because, kayak fishing is much different than fishing out of a boat. You’ll be closer to the water, the vessel is slightly less stable, and you’ll be at the mercy of the current and the wind. All of these factors will require a totally different approach than angling from a traditional boat.

So, plan on spending a little time practicing in your kayak, especially if you’ve never used one before. You can try out new casting techniques, steering tips, and learn how to expertly handle the fishing kayak before you head out for a longer fishing excursion. It is important to choose the best kayak made for fishing that suits your needs before hitting the water. 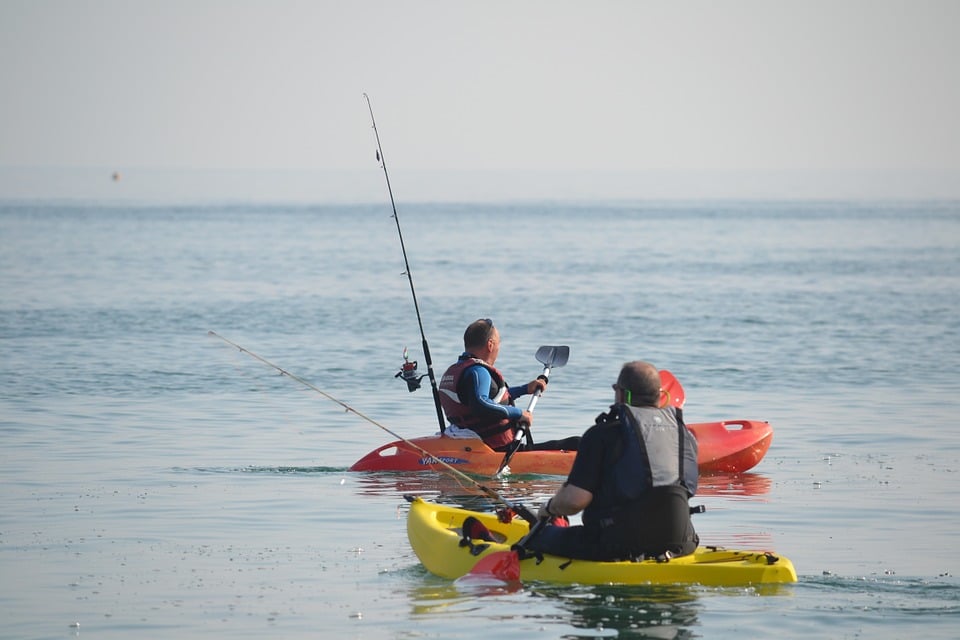 You’ll need to learn how to cast one-handed. This is probably the most difficult adjustment for most anglers who are used to fishing from the stable front deck of a boat or from the bank. Even the sturdiest, most stable kayak won’t have much room between the water and the sitting surface. This can make a basic windup cast using both hands a little sketchy. An angler with experience fishing in a kayak can cast one-handed most of the time with either spinning tackle or bait casting, so it’s important that you gear up accordingly. Instead of a one-ounce jig and a super heavy flipping stick, try fishing with more finesse and lighter combos.

Much like the one-handed cast technique, learning how to efficiently fish from a kayak will also require some skills handling a paddle with just one hand. With two hands, paddling a kayak is pretty simple, as the rhythm comes pretty easily for even beginners. But what about when you’re fighting a catch using just one hand and you have to steer the kayak back upstream in order to avoid an overhanging branch or to get to the other side of a laydown? You must practice locking the shaft of the paddle along your forearm. Doing this will anchor it along your arm, allowing you to use it more like a paddle for a canoe.

While this may seem weird, you’d be surprised how often an experienced kayak angler uses their feet in some manner while fishing. If the kayak is narrow enough you’ll be able to use your feet as rudders to steer the drift on rivers. The feet work great as anchors when you’re fishing shallow areas, laydowns, and fishing riprap. All you need to do is stick one of your feet out in order to latch onto a log until you’re done fishing in a particular spot. The feet can also be used for redirecting the kayak from a log, stump, or another type of obstacle while your hands are currently busy fighting to land a fish.

Baits that offer resistance, such as chatter baits, spinner baits, and crank baits can actually be used to help steer the kayak. If you’re fishing using a crank bait for a lightweight kayak, then you’ll realize quickly that the simple resistance of reeling the bait in will work to actually pull the kayak in the exact direction you’re casting. You can really use this to your advantage and make casts in a specific direction in order to slightly adjust the position of the kayak.

Lesson Five: How to use an Eddy for Better Fishing 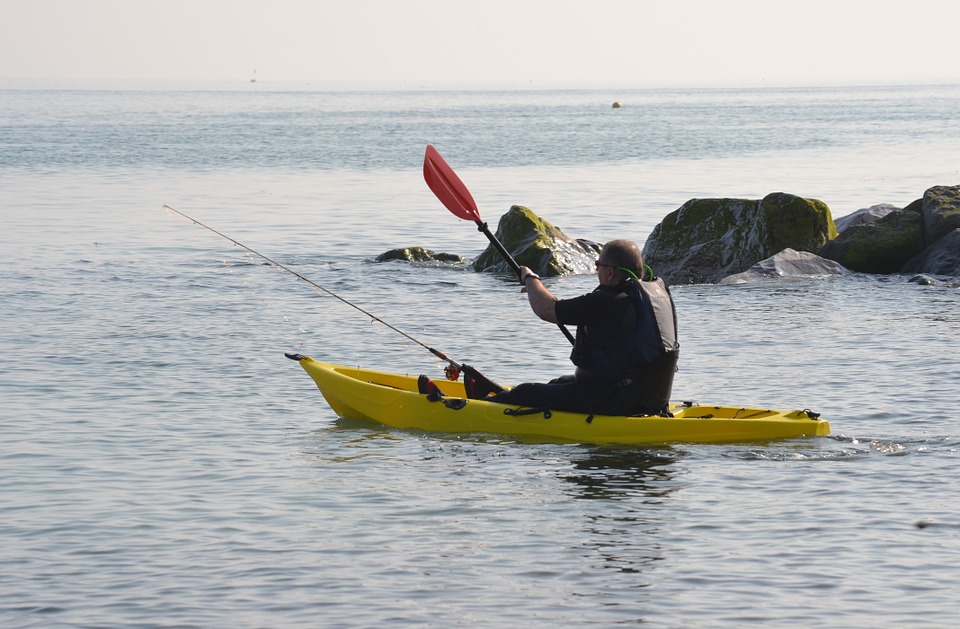 You may think the current can make kayak fishing a total nightmare, but that’s actually pretty far from the truth, just as long as you know how to use the current to your advantage. Most models of fishing kayaks are light and short enough to sit entirely in an eddy, which prevents the kayak from moving downstream, while also giving the angler plenty of time to fish the corresponding current seam. In order to maximize the potential of this situation, you should ride past the spot you want to fish and tuck the kayak into the eddy located behind it. This will allow you to fish for as long as you want, and all without having to paddle.

While a little cumbersome, an anchor is definitely a must for any kayak. This is especially true on windy lakes, or even in offshore areas where you want to remain in one particular area. For most models of kayaks, a two to four-pound claw anchor is a perfect choice. Just be careful when it comes to anchoring in the current. The current can actually push the entire kayak under water. Most kayak anglers who enjoy fishing on the river will utilize a quick release clevis on their anchors.

When you’re paddling up current or if it’s windy, it will take a ton of effort in order to make any headway. In situations such as these, use the minimal draft of the kayak to your advantage. Get the kayak in shallow water instead of paddling down the middle of the lake or river. In the shallows, the current won’t be nearly as strong, and the waves and wind will also be mitigated by structures and shoreline vegetation. This will allow you to paddle more efficiently, while also saving you time and energy that would otherwise be spent fighting the current or high winds.

Best Kayak for Fishing in Freshwater and Saltwater

The best fishing kayak should be affordable, easy to transport and easy to maintain. A solid kayak for fishing will also offer the angler a more stealthy approach to wary schools of fish much better than a boat with a trolling motor. Additionally, many anglers choose...
Read More

Tandem fishing kayaks are definitely not the most efficient way to paddle and they require patience, coordination, and a focus on teamwork. That being said, they’re also a lot of fun to use and they’re a great way to bond with family and friends. These models are...
Read More

If you haven’t tried fly fishing from a kayak yet, or if you’re just looking to upgrade to a model that’s better suited to your fishing needs, what exactly are you waiting for? Kayak fly fishing is pretty hot right now. In fact, it’s one of the hottest trends in...
Read More

Guide to Finding the Best Paddle Boards in 2020We are really excited about how quickly paddle boarding is gaining popularity. We love the serenity of being out on the water, and when you combine that with the exercise of paddling, well, in our opinion, it doesn't get...
Read More

New to Paddle Boarding? Here are some of the best tips and tricks you should know about when getting into this trending sport. Before we get into the tips of actually standing up and making sure you don’t make a fool of yourself by falling in the water every paddle...
Read More

Comprehensive Guide to Traveling With a Paddle Board

Tips for Traveling With Inflatable SUP Stand up paddle boarding is a diverse sport and activity that can be done on many different bodies of water; including the ocean, bays, lakes, reservoirs, and even rivers.  With so many options to choose from, paddle boarders...
Read More

Get fishing tips, shop for fish finders, fishing kayak, boat accessories, paddleboards, gears, trolling motors and more. Get the inside story on the most popular fishing gear at The Small Boat Shop!